We’re all familiar with the saying, “The man, the myth, the legend”. Well, I believe I found the female version of it in the Bible. We meet her in the book of Judges. She is Deborah-The woman, the prophetess, the wife. Her name means “Bee” and a busy bee she was. We learn from scripture that she had a family, ministry and a job. And when her plate seemed full enough, God brought a new challenge to her. I have found a new admiration for Deborah reading Judges 4 and 5. Here’s what I observed:

1)      SHE FOLLOWED GOD- Israel was doing evil in God’s eyes. But Deborah chose to follow God and not the crowd. She remained faithful while surrounded by evil.

2)      HER FAITH WAS OBVIOUS- In verse 4 we find Deborah under the palm tree as she ministered to people. Her ministry was not private. Her spiritual growth was evident to all. And her testimony was an open book to many. She was located between Ramah and Bethel. Ramah was a pagan place of idolatry, and Bethel was a house of God. She sat in the middle helping the lost find their way to God.

3)      SHE AROSE- In Judges 5:7, she says, “I Deborah, arose, as a mother of Israel”. She arose to her new challenge. She arose to nurture as a mother. She didn’t arise to replace the ministry of a man, but rather, she brought forth her own motherly ministry. It’s rather natural for us moms to arise and put our own needs on hold to tend to our little ones. But here I see Deborah rising up as a spiritual mother to her people, Israel. What would happen if women everywhere arose as spiritual mothers to those around them? What would happen if we would arise to our calling in ministry? I love the fact that Deborah highlighted her femininity without being a feminist.

4)      SHE CONFIRMED- She reminded Barak the words God had spoken to him already (Judges 4:6). She ministered to him by speaking the truth he already knew. Sometimes the people around us don’t need a new thing, they just need a confirmation. What if we made a point to speak familiar scripture truth to people around us to confirm God’s word to them?

5)      SHE ENCOURAGED- In Judges 4:8, we see that she did not belittle the man; but she “tag teamed” with him. She encouraged him to do his part as general as she did her part alongside as a prophetess. The battle strategy here was Barak’s and Deborah’s unity in ministry. Deborah, “The Bee” used her stinger for the enemy and honey for her own people. We have to careful not to do the opposite.

6)      SHE DID NOT SEEK THE SPOTLIGHT- In Judges 4:9, we see that no one sought the glory of the victory. Neither Barak nor Deborah got the glory because they knew their victory came from God.

7)      SHE ENCOURAGED AGAIN- In Judges 4:12, we notice that encouragement is Deborah’s strength. When we hear “prophetess and judge”, we often assume the worst, expect them to embarrass us, call out our sins in public and make us feel ashamed. But here we see Deborah, the judge, speak words of encouragement to Barak once again. She reminds him how much the Lord has done for him in the past and encourages him to go on. We do not see Deborah shaming him or laughing at him at his weak moments.

8)      SHE PRAISED AND SHE PRAYED- Chapter 5 reveals to us where Deborah drew her strength from. Her song speaks of her conversation with God and gives us a glimpse of her prayer life. This mighty woman of God spent time in God’s presence before she ministered to people.

9)      SHE CHALLENGED THE WARRIORS- Judges 5:15,16 states “There was a great searching of hearts.” Her life, her testimony and her courage caused the warriors around her to search their own hearts.

10)  SHE KEPT MARCHING ON- In Judges 5:21, Deborah sings from her heart. “March on, my soul and strength.” Against doubt, fears, impossibilities, Deborah kept marching on in strength. All of us can have Deborah’s anointing. You and I can be the woman, the prophetess and the wife. 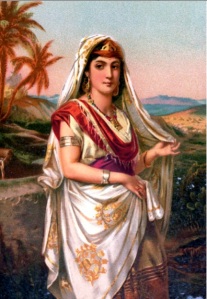 A prayer of declaration:

Father, I pray you would pour out Deborah anointing on the women in the Body of Christ. Lord, we desire to live a life that testifies about Your power and Your strength in us. We are not afraid to show our weaknesses and we will not be quiet about the Source of our strength.  Holy Spirit, infuse us with wisdom as we carry out our divine assignment. Let us not get idle and lazy in our spiritual walks, but remain busy and actively growing. At the same time, let us not be timid and afraid to fulfill our assignment.  Lord, we desire to advance Your Kingdom along the side with the strong men of God. May we all utilize our gifts. Lord, I pray we too, just like Deborah, use our mouth to encourage, build up, confirm and bless others around us. May we become women of the Word and worship, just like Ps.149:6-9 speaks, we will march around with praise as our weapon and the double-edged swords. Let us arise as spiritual mothers in our generation. Let our soul keep marching on in strength. Teach us to balance with wisdom our personal walk, our family and our ministry.   In the powerful and glorious name of Jesus, amen.

Lenna was born and raised in Volgograd , Russia. She grew up in a family that did not know Christ. At the age of ten, she and her brother found a Gospel preaching church and became first the generation of Christ followers in their family . Then, at the age of eighteen, Lenna felt a strong calling for missions and the Lord opened doors for her to become a missionary to the country of Georgia. Today Lenna and her husband, Zach, reside in Nebraska,. They have 3 children together. Lenna enjoys cooking, spending time with the family and a good harty in-depth Bible study. Her husband leads worship at their local church. Lenna enjoys writing about the things God reveals to her through the reading of the Word.

One thought on “The Woman, the Prophetess, the Wife”